So I had Pilates today, and it was a good class.  And I've pretty much finalized my training schedule for the half marathon and actually feel pretty good about it, so I'm jazzed about that.  But that's not what is important today.  There is a show on the Sprout channel that my kids are in LOVE with called Lazy Town, and it must be discussed.  The premise of the show I actually think is pretty good because it's about  getting kids off the couch, unplugged from the TV, and instead to get them outside to play, be active, and eat healthy.  Sort of ironic, but they wouldn't be getting this "message" without being plugged into the TV in the first place, but we'll let that one slide.  Also, it's called Lazy Town, not Active Town, or Healthy Town or something else a little more obvious, and I get that the "new girl in town" Stephanie along with her friend(?), superhero(?), "secret" (i.e. "don't tell anyone, it's our little secret") friend(?) Sportacus come in to turn Lazy Town around from being filled with video game playing, lollipop eating, unhealthy, lazy "kids" (and by "kids" I mean creepy puppet things) into, for lack of a more clever title, Un-Lazy Town.  But for a long time, watching the Sprout channel, they were building up the premier of this awesome new show Lazy Town without any explanation as to what it was about.  And as a parent, every time the promo came on I'd think to myself, my kids don't need any more help being lazy and watching too much TV, thankyouverymuch!

So, the show, which I think is several years old now - (it's just airing on the Sprout channel for the first time now) - consists of a few human characters (Stephanie - "the new girl", Sportacus - "the super hero"(?), and Robbie Rotten - "the bad guy") and the rest are these super creepy puppet people.  (Although, some of these puppet people are growing on me.  Like Stingy, he sings this song "Mine" that's actually quite catchy, and now my little guy, whose vocab is growing exponentially, walks around the house claiming everything is "mine, mine, mine!" - Thanks, Lazy Town!)  And for your listening pleasure:


Stephanie is a super cute girl with bright pink hair and a pink dress, really high energy and perky, and she likes to break into dance and song at any given moment.  I quite like Stephanie actually.  She's not annoying or obnoxious, in my opinion, which a LOT of characters on kids shows are. 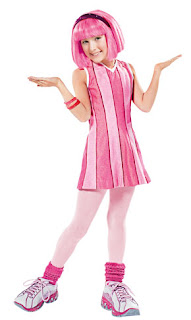 Robbie Rotten is quite a humorous character who as the "bad guy" doesn't do anything terribly wrong except try to keep the residents of Lazy Town being lazy.  He wears really funny Loooooooong pinstripe pants and matching super short vest, which definitely adds to the humor factor, but he has plenty of costumes he often wears to try to "trick" the residents of Lazy Town, with his ultimate goal of each plan to get everyone to eat candy or watch too much TV, etc.  As a parent, I totally approve of this type of "bad guy," and my kids think he is beyond hilarious so he gets big thumbs up. 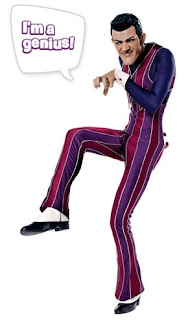 So then comes Sportacus.  As a stand alone guy, I actually have nothing bad to say about him.  He does some pretty cool gymnastics flips and kicks and jumps, and he calls fruit "sports candy" which is a little pretentious, but if it gets my kids eating more fruit I'm all for it.  (Hell, I even made the mistake of calling soda "tickle drink" the first time my big one asked me what it was - it was meant as an explanation "it will tickle your tongue" but now he calls it "tickle drink" all the time and in public and it kind of makes me cringe, like Michael Jackson giving the kids at Neverland Ranch "Jesus Juice."  But I digress...)  He has this pretty funny pointy-style mustache, and I'm kind of a mustache fan, so I'm all for that.  And he lives in this pretty rad blimp thing that I guess just hovers over Lazy Town indefinitely?  Because he's always there to jump out and help save the day whenever his signal is called. 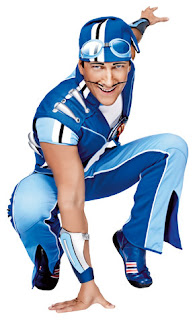 However, my biggest complaint regarding Sportacus is that his relationship with Stephanie is just a wee bit inappropriate in my opinion.  I kind of feel bad thinking this way because I do think it's important for children to have positive male role models, and I also think it's important for children to foster healthy relationships with adults who are not their parents, not family members, etc.  I'm just wondering whose brilliant idea it was to pair up a very young, cute girl with a full-grown man who just pops in out of nowhere in super tight pants with his package quite on display always doing jump split things with his crotch right at her eye level and her breaking into dance every other minute in front of him in a super short dress...  And evidently I'm not the only one who feels this way: 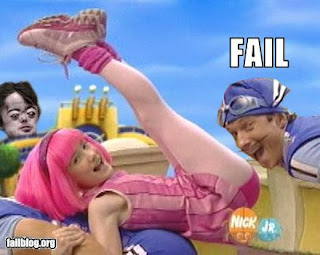 And PLEASE notice that super creepy face in the back on the left.  WTF???  This is a kids show!!
Posted by Kate at 9:47 PM 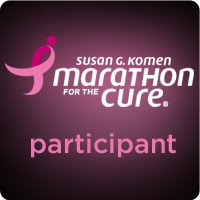 On November 16, 2011, I lost one of my very best friends since childhood, Jill Tongol, to breast cancer. She was 34 years old. I am running the Chicago Marathon to honor her memory and to raise money for the Susan G. Komen For the Cure foundation. Please visit my donation page and help me reach my goal of raising $1,500 for this cause!

Kate
Mom of 2 crazy boys. It's all pre-school, playdates, poop talk, WATCH ME MOMMY!, temper tantrums, snuggles, and everything in between. I'm socially awkward...can't poo in public...you know, the usual hang-ups.